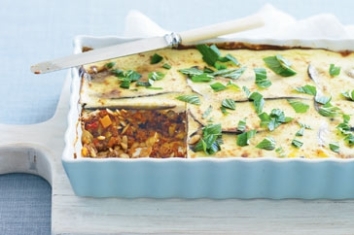 When I stumbled across this recipe, I was so excited to try it because I’d not much cooked Greek style food before and the whole thing promised to be easy, yummy and affordable, which is just what this blog is about . It proved to be excellent and I’m thrilled with the nutritional value of it too. This recipe was originally published in Good Taste magazine and it scores a fantastic 4/5 stars on taste.com.au. Enjoy the fact that the veggie components mean it can be eaten on its own or serve with a side salad and some crusty bread. Depending on the cost of eggplant (worth a trip to the grocer for this one!), this dish, which serves 6-8 will cost around $12 to make.