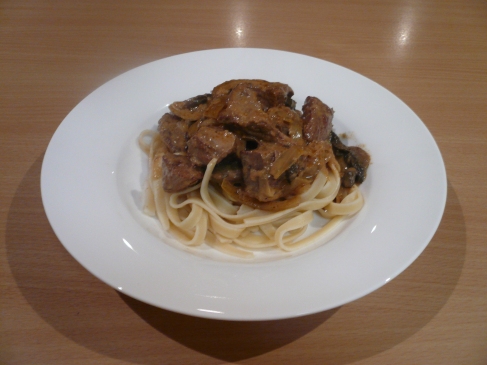 Beef Stroganoff is a winter staple in our house. It’s a great choice for warming up on a cold night and it’s the sort of dish that stretches easily to accommodate others at the last minute. The recipe that follows started out as a Woman’s Weekly recipe from the 80’s but has morphed over the years into something that works in the slow cooker and takes my family’s tastebuds into account (we like it quite tomatoey). Please know that this recipe copes well with the addition of veggies such as carrots and green beans, which stretches it even further and improves the nutritional value – simply throw them in the slow cooker about an hour before serving. If you don’t have a slow cooker or need to make this in the late afternoon, simply halve the amount of beef stock and cook the whole thing in an electric frypan. The only catch is, that you will need to let it simmer away for no less than 1 hour to ensure the beef is nice and tender. Finally, a couple of comments about slow cookers: remember the versatility of using a slow cooker. I’ve often made this recipe after dinner when there’s less disruption and let the stroganoff cook overnight on low. In the morning it’s ready to divide up and freeze, refrigerate until dinner time or even give away to someone who needs it. Also, it’s important to know that getting something like this going in the slow cooker can take a good half an hour (though, that’s all it will require of you), so consider increasing the quantities to completely fill it – providing you with lots of meals for the future and the most economical use of your time. Doubling this recipe completely fills a 5.5L cooker. With the quantities listed below this dish will cost under $15 and serves 8.

1. Toss strips of beef in flour and brown in a frypan on very high heat, a little at a time until the whole batch has been browned.

2. Add sliced onions, garlic, mushrooms, stock, tomato paste and stir well. Allow to simmer for a few hours or put it all in the slow cooker on LOW for around 8 hours.

3. Just before serving, stir through the sour cream and serve on either rice or fettacine.